Happy Ganesh Chaturthi to All. Yes! its the third day of Vinayaka Chaturthi today and many of us have already done Ganesh Visarjan by now. Some keep Lord Ganesh in their houses and streets for more than three days and some do the visarjan in just a day. Here in Bangalore, I have seen people bringing Sarvaganik Ganesh Idols and doing visarjans a month after Ganesh Chaturthi. During my childhood days, me and my friends used to visit each and every house in our neighbourhood and used to ask "Aunty! Nimma Maneyalli Ganapathi ideya" means "Do you keep Ganesh idol at home?"They used to greet us and give prasad in the form of ladoo's, holige, fruits and even chocolates. We would try to finish visiting atleast 101 houses where Ganesh Idols are kept and we believed that its lucky if we see 101 Ganesh Idols that day. Oh! so sweet innocent were those days.

Now coming back to our recipe, Modaks.
Modaks are sweet deep fried or steamed dumplings. Its believed that these modaks are Lord Ganesh's favorite snack. Hence its offered to God in the form of Prasad. The sweet stuffing is made up of freshly grated coconut and jaggery mixture. Its the same stuffing which is used for another traditional Festive special Patholi. Nowadays even the sweet stalls have come up with modak shaped peda's especially during Vinayaka Chaturthi festival month. 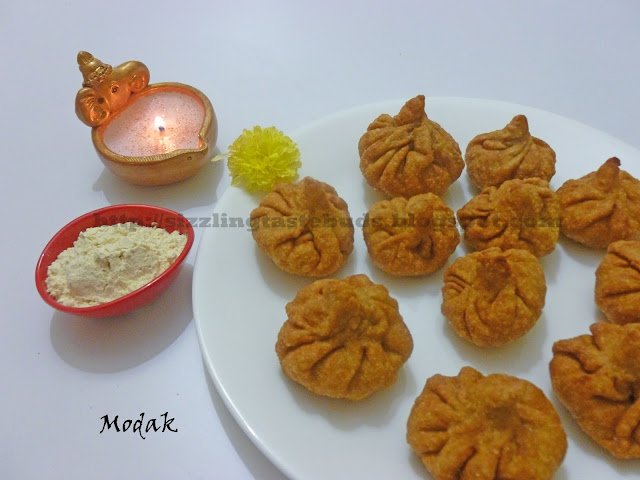 1. Stuffing : Mix grated coconut and jaggery in kadai and fry it till the jaggery melts and gets mixed well with coconut and the mixture turns golden brown in color and hardens a bit. Add Cardamon powder, mix again and keep aside for cooling.

2. Prepare the dough with Wheat flour, Salt, Semolina and water. Make small balls out of it.

3. Flatten each dough balls with a roller, dusting them with some wheat flour.

4. Place the coconut and jaggery mixture at the centre of each flattened dough and bring all the ends together, twisting it slightly to get a modak or potli shape.


5. Deep fry these modaks till you get a nice, crisp, golden color.

Modaks are ready to be offered to Lord Ganesh . 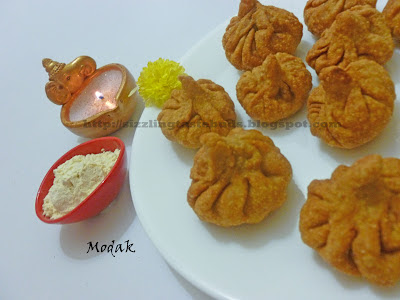 Happy Ganesh Chaturthi to All